Chinatown Square, the food hall that replaced Shanghai Bazaar at 1016-18 Race St., is rolling out its operation slowly.

And from the roster of what's coming, owners Kenny Poon and David Taing are building a veritable United Nations of food in the heart of Chinatown.

Poon and Taing expect to have 14 operators open from morning till late night.

Over Christmas week, The Halal Guys opened with Middle Eastern beef and chicken platters and sandwiches in the front window of the two-story building. Following soon after was I•CE•NY, a branch of America's first Thai rolled ice cream shop.

TeaUs, a New York-based maker of bottle tea (on its way).

Philly Poké, serving the Hawaiian-style raw-fish called poké, as well as poke-ritos, sushi to go, musubi, and rice bowls; Andrew Hu, whose family owned Blue Pacific, a former tenant at the King of Prussia Mall, is in charge.

Coreano pairs Tim Liu of Monarch Philadelphia and chef Hee "Chino" Chang of Monach and Bop, who have developed a Mexican-Korean hybrid taco creation called the coreano. Among them: bulgogi tacos on corn tortillas with gochujang and Korean sweet peppers sauce with Mexican cheese; and carnitas with daikon kimchi slaw .

Access Karaoke, on its way, will have private karaoke rooms sponsored by different liquor brands.

The Johnnie Walker Lounge will be an open-seating-style bar lounge with music videos. It can be rented for private parties.

Also pending are Dae Bak, a full-service, traditional Korean restaurant on the upper level, and a wine retailer called Cork and Bottle. A 14th shop is TBA.

I Ate My Way Through Chinatown Square. Here’s Everything You Should Know. 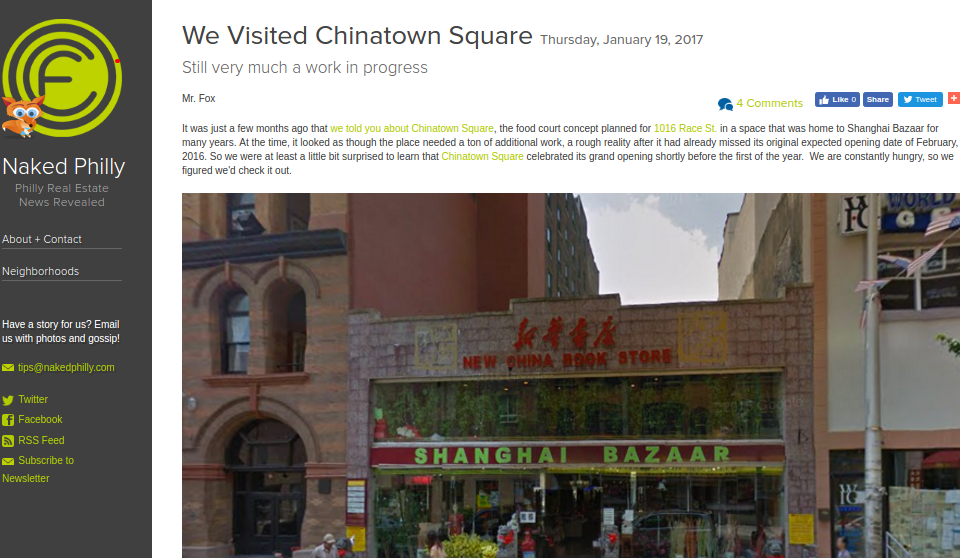 It was just a few months ago that we told you about Chinatown Square, the food court concept planned for 1016 Race St. in a space that was home to Shanghai Bazaar for many years. At the time, it looked as though the place needed a ton of additional work, a rough reality after it had already missed its original expected opening date of February, 2016.